His brother, Robert ”Bob” Locke let me post a link to what he had written about his brother´s final days.

In 2014, Bob took me to his brother´s grave, where their parents are also buried at Benicia City Cemetery, Solano County.

We had a rather fantastic meeting, also a bit challenging, as he told me some rather racy stories about Richard, almost like a test, but he was very funny, and I think I passed the test. We both enjoyed the meeting, and have stayed in touch since.  I saw Richard in the film 5B, and sent Bob a photo of it, on March 15th.

Bob talked about Richard and his last lover. I seem to remember that they lived in a caravan. Bob told me that they used a lot of drugs, had sex, and fought, and it sounded really dramatic and desperate.

For some reason I started thinking about that on April 18th (2020), I have no idea why, but it came back to me several times, which brought me to think about Robert, that I wondered how he was, being HIV positive in this Pandemic. So I wrote.

And the day after he sent me a letter that immediately had me sitting down. I needed to lean on something.

”A normal question for these Covid-19 times, Pia-Kristina, but for me the timing is strange. I was diagnosed with Diffuse Large B-Cell Lymphoma on April Fools Day. I had been sick since November so in fact was akin to glad to find out I had a kind of terminal illness which qualifies me to register in CA for physician-assisted suicide.

That must be strange for you to read. Sorry, if so.

And since that day I have been going through the processes which are nicely in place in Kaiser. I’ve found it extremely interesting and have found the body’s dying processes interesting. I’m weaker daily, picked up a cane early on, and this morning am leaning on it so heavily that I suspect this will be my last day of mobility.
I asked B. (my housemate and best friend from 8th grade) about perhaps installing a hospital bed in the living room. Kaiser Hospice will take care of that and I guess will be visiting me daily from now on.

The ending date (when I take the powder and water) is unsure. I have quietly objected to the 15 day delay that CA requires of the Attending Physician after the first interview. That delay I am sure is for the patient to have time to reconsider, and that’s good and wise, I’m sure. But since it took the End of Life Coordinator until April 10 to sign on an Attending Physician, I’ve already had ten days for reconsideration. I don’t need another 15 days of this kind of deterioration.
And to cap that off, the 25th is a Saturday, probably meaning that it won’t be until the 27th that the Attending Physician will make the prescription to the Pharmacist who is also required to meet with me.

Meanwhile I am a shell of discomfort though not really pain. And I watch the news all day long about all the human lives that are being lost in great pain around the entire planet. It’s a very strange time to be dying myself and making the decision to do it sooner rather than later. 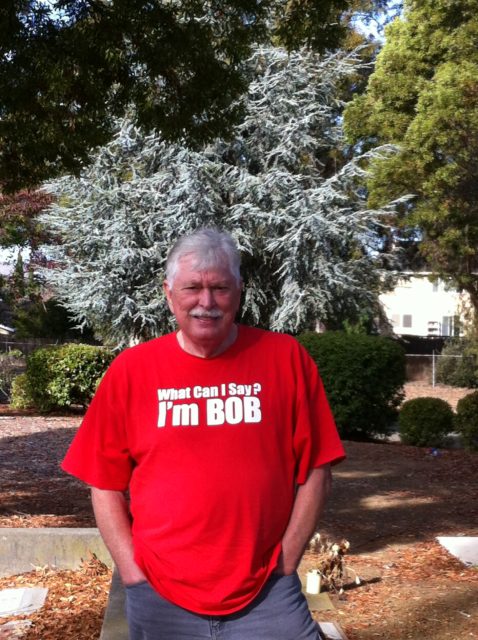 I was just stunned. I have lost so many people, several to suicide, but never this way. I wrote: ”Oh what a letter! I can feel my heart beating.”

I wondered if someone would be there for him and hold him, and I begged him to ask someone to tell me when he had passed away.

And Robert asked a dear friend of his, Mary, to contact me. And I am so grateful, because we have been in contact since. She could not go and visit him, because of the Corona virus, and was dependent on information from the friends that were there with Bob. She also asked for me, if I could write about this, and Bob said yes.

I lit a candle for Bob in church, and wished him peace of mind. I wrote that I thought Richard had sent me, because had I waited a week, I would not have known what had happened. Maybe never.

Some days passed, and one could sense a worry as Bob´s health deteriorated. He was in a lot of pain, and it was several days before he could talk to he Physician. Couldn´t they hurry it up!, I wondered, but Mary told me that they had to follow protocol.

The Physician was going to have an online meeting with Bob, write the prescription and then the Pharmacist would bring the drug to Bob. And he had to take it, himself. And that was the worry, maybe he would be so sick that he couldn´t take it.

Then the hospital bed was installed in Bob´s living room and Bob was given a lot of help with his pain – he even played online-bridge with some friends for some hours. And I wondered… maybe with pain relief he could go on living for a while, but Mary who knew the extent of his cancer, said no.

This afternoon April 24th, Swedish time I wrote to Mary wondering how ”our patient” was, and as we wrote to each other, she was told that Bob had passed away, the night before. It had happened very fast. He did not have to commit suicide.

I was so stunned in the beginning, it was absolutely unreal to wait for this suicide, but the thought of writing about the two brothers has helped me.

Here, Bob is standing by his parents grave. To the left is Richard´s grave, and to the right, Bob´s grave to be.

Thank you Bob for letting me post this.  Little did we know… 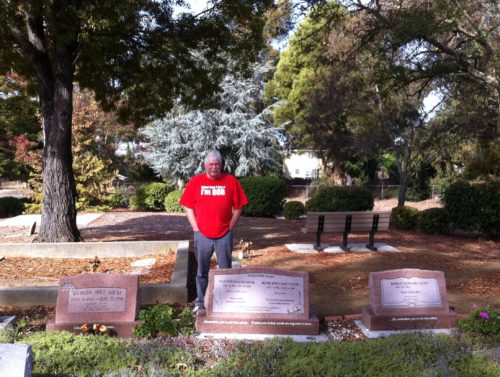