In a few days the film 5B about the first AIDS Ward at San Francisco General Hospital, will open. It has already been shown at the film festival in Cannes.

Alison Moëd, in the film, was one of the first people I interviewed at San Francisco General Hospital, in 1987.

A relative of mine just sent me this article about it:

Tomorrow I am off to Gothenburg, to speak in a church on Sunday. Pride finishes there tomorrow, Saturday.

I will speak about the work I have done, but I will also talk about a similar service that took place in Stockholm, in 1990, in Storkyrkan, the big church in Old Town.

But first I want to mention another service in the same church, a few years earlier, April 21st, 1985.  There were a lot of discussions about homosexual people and sex in the society, and the Archbishop had suggested that homosexual people should live in celibacy, because ”sexuality belongs in marriage”.

This was a service, with the Bishop of Stockholm, Krister Stendahl and other priest, about God´s love for all, and healing.

Suddenly a man started screaming: This is Satan´s Synagogue!, and he screamed and screamed.

There were police there dressed in civilian clothes, and they and some visitors carried him out. 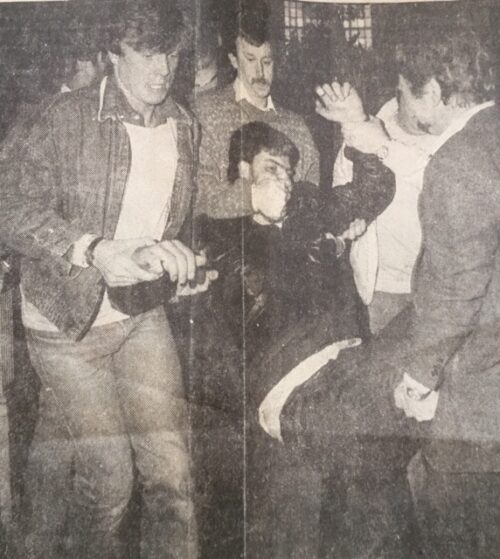 But then other men, that had positioned them selves in other places in the church, started screaming and cursing. And visitors started crying.

Bishop Stendahl started singing We shall overcome, and people sang and cried.

It is something very special to hear a person scream in a church.

For several years I was worried that something similar would happen. And it did, but in different ways. There was some screaming, but his time we were prepared. Other times but people would stand outside the church with big placards saying we would die, or dressed in monk´s habits with dark hoods as Death, with scythes, waiting for us.

There were police, but they were not there to protect us, but the demonstrators that turned out to be Jehova´s Witnesses.

Pride in Stockholm always ends in Storkyrkan, with a service called Kärlekens Mässa / A service of Love, with communion and all. The church is usually packed with people; gay people, parents of gay people, friends.

Before the service, we who were supposed to participate, gathered in the vestry.  We were told that a gay man had been stabbed to death in Gothenburg. It gave the service a very serious and chilling dimension.

It turned out that this man had been provoked by two men outside a gay club, and he didn´t back off, but went after them and that sealed his fate. He was cornered, and then stabbed, 40 or 50 times.

The killers were very young, 19 and 22, and they were Neo-Nazi´s.  They went to jail for this, but not for long. One of them has killed another gay man since. He thinks it is his right. During the trial, one of the older female Swedish Nazis was there to support the young men. She was interviewed about it, and she said: We don´t see Homosexuals as people. We regard this as cleansing!

(To my horror I found out that she lived in Vadstena that I eventually moved to, after my retirement in 2016.  It is a town known for the saint The Holy Birgitta, churches and a convent for The Birgittine Nuns.

The Nazi, born 1928, still had a big portrait of Hitler in her home and she tried to invite young people to her home.  She eventually moved away in protest, because there was a Pride March in this little city. )

My part in the service was to read a poem, and I read it and finished by mentioning all the men I had known that had passed away in HIV/AIDS. They were so many that I forgot some of them.

Death is nothing at all

I have only slipped away into the next room

I am I and you are you

Whatever we were to each other

That we are still

Call me by my own familiar name

Speak to me in the easy way you always used

Put no difference into your tone

Wear no forced air of solemnity or sorrow

Laugh as we always laughed

At the little jokes we always enjoyed together

Play, smile, think of me, pray for me

Let it be spoken without effort

Without the ghost of a shadow in it

Life means all that it ever was

There is absolute unbroken continuity

What is death but a negligible accident?

Why should I be out of mind

Because I am out of sight?

I am waiting for you for an interval

Just around the corner