I was not alone in the room, there was also an elderly woman dressed in black. We started to talk, and it turned out that we were both grieving; she had lost her son, and I had lost my mother.  Her name was Janina Ludawska, and we became friends.

One thing I need to add here, is that I have been very involved in the fate of a group of Survivors from the Nazi Concentration camps, that came to Sweden in the spring and summer of 1945 for rehabilitation.

Some of them took part in an investigation about their experiences, through questionnaires or interviews, and a book with some of their answers was published in the fall of 1945, ”De dödsdömda vittna”/ ”Those who were sentenced to death testify”.

In 1980 I was given that old book, and I immediately started looking for the people in the book, to find out what had happened to them after the war.  It turned out to be a very long search, and yet I did not find all of them – I was looking for 199 persons that were quoted in the book – I found about half of them, all over the world, and some of them were willing to communicate with me.

When I met Janina Ludawska I was already involved in that ”project”, and I had started this.  I knew nothing about her life, how she had come from Poland to Sweden, for example. We were both concentrated on HIV/AIDS when we met.

Some years later I interviewed Janina, and it was one of the most upsetting interviews I have ever made, because this was when her past came up. It was like walking on broken glass, because everything we talked about was so sensitive.

Janina was Jewish and she was the only survivor of her family. She happened to be in Sweden when World War II started, September 1st, 1939, because she was taking a course here.

Her parents, and other family members were in the Warsaw ghetto, and she managed to stay in touch with them for a while, but then the letters stopped coming. Many Jews in Warsaw, were taken to the extermination camp Treblinka, where they were killed on arrival.

After the war, Janina returned to Poland, to help build up the country. She had a son, Tomek/ Tomas, but when antisemitism flared up again in Poland, 1967- 1968, they left for France, and were later invited to came to Sweden. Tomas eventually went to the US and worked there.  He was a gay man and became infected with the HIV-virus.

Janina and her son were very close, and when he became seriously ill, he wanted to go home to his mother. He left the hospital against the will of the doctors, got on plane to Sweden, and Janina met him at the airport.

I have been told that he was so sick that the ambulance refused to take him, so they took a taxi to the hospital.

Tomas was given a room, he showered and went to bed, and Janina sat beside him, as he was going to eat something. Janina said he was smiling, but after a while when he did not respond, she called for a nurse, who could only tell her that her son had passed away. Just a few hours after his arrival.

After his death, what did Janina do? She did the same thing as after the war, she went to Poland, but this time to speak about HIV/AIDS, trying to inform people.

And she volunteered at Noaks Ark.  There was at the time a Guesthouse where people with HIV/AIDS could come and stay. Maybe they just needed to come away from a city where no one knew they were ill, maybe they were lonely, exhausted, sick, but not sick enough to go to the hospital.  Janina was there, helping out, together with the staff.

This one person was stricken by both the Holocaust and HIV/AIDS, and had the strength to continue living.

There is more to this story.

My work on HIV/AIDS took a long time, and one day Janina asked me to give the interview back to her, and I was very sad and actually shocked about it, but it was her life, her story – of course, what could I say? I sent everything back to her, the tapes and even the transcript – I had nothing left.

During the coming years we ran in to each other, and eventually I found out that Janina had been interviewed by someone else who wanted to write about her, and since they were close friends  she wanted to be faithful to him. I can understand that, but unfortunately he never wrote about her.

In 2004 my book about the Survivors was published, ”Those who were sentenced to death testify – 60 years later”, and in 2008 a new revised version was published, and I called it ”Mina föräldrars kärlek”/The Love of my Parents”.

During this time I met a Polish scholar specializing in the Holocaust, and we talked about having my book translated to Polish. We applied for money to do it, and she contacted a book company in Poland, Czarne.

Suddenly I got a phone call from the scholar, she had a surprise for me – Janina Ludawska had agreed to translate my book about the survivors to Polish. She wanted to translate it in memory of her family. And so she did, at the age of 87.

The book was published in Poland in 2009,  and we went there to talk about it at a Book Fair in Warsaw, and in different cities. We spoke with journalists and took part in several radio programs. The book was also presented on Polish television. 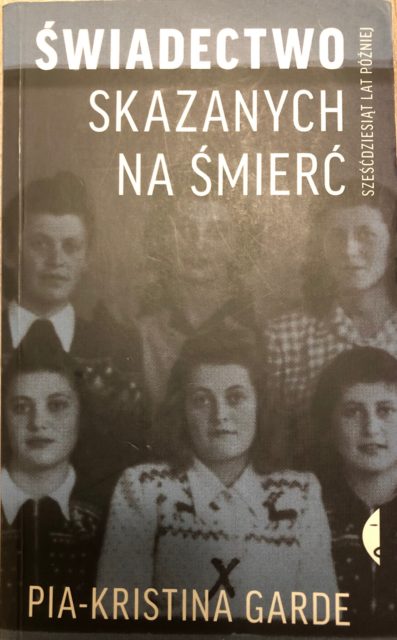 This photo of Professor Tych, from The Jewish Historical Institute in Warsaw, who wrote the foreword to the book, me and Janina is taken in Warsaw when we spoke at a Jewish center. 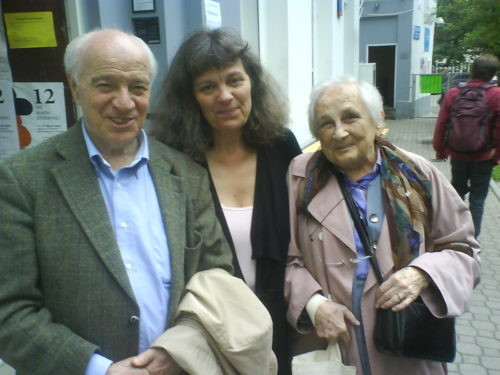 I visited Janina now and then through the years, and I went to her son´s grave for her, because she wanted to know if the roses were still there. 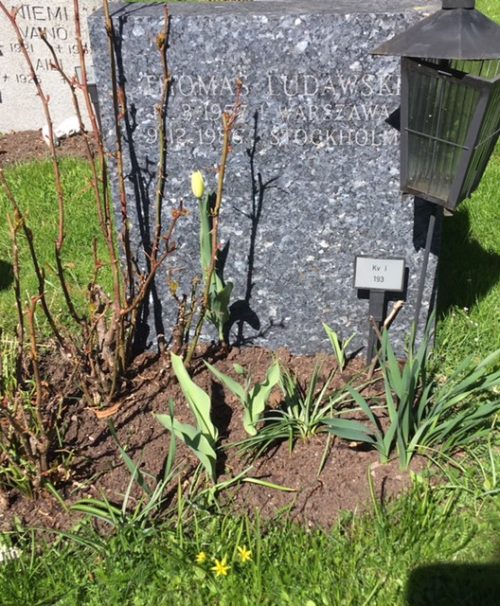 This photo was taken the last time I visited Janina in her home. 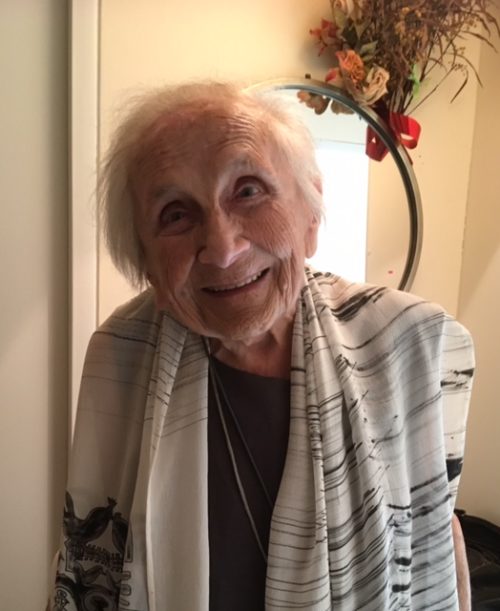 Eventually she moved to a care home, and it was there I met her the last times, in November and December 2019.

I knew she had lived in Russia, so I brought her a book with poems by Boris Pasternak, both in Swedish and Russian, and she smiled and read Russian poems to me.

I also brought her the book I had written on HIV/AIDS, published 2018, and she looked in to it, really interested, because she knew most of the people I had written about.

And then, finally, we talked about the interview. I asked if I could write now, and she said yes.

The last time we met, she had a hard time breathing, she was extremely thin and almost disappearing in to the bed.  She was still smiling, but struggling a bit with the breathing, so I did not stay long.

I opened the window a bit, touched her cheek and left, saying Good night, sleep well. I told the staff about her breathing and called her closest friend, and legal guardian about it.

I know now that Janina was taken to hospital, and that she died the next day, almost 98 years old.

She is now buried with her son.

Unfortunately, I never got the interview back, nor the transcripts. So this is from my memory – fragments of the chapter that was never written.

I just googled Janina, and found something I had never heard before – about her name. From the beginning her name was Janka Halperson. The surname I knew her by, Ludawska, was an anagram, linking the first two syllables of her parents name Luba and Dawid.