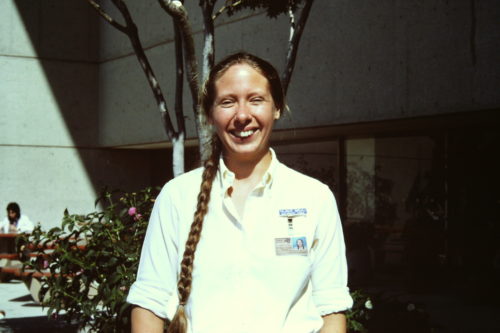 Laurie D. gave me the first interview in San Francisco, 1987.

We went out on a terrace at the San Francisco General Hospital, it was towards the end of lunchtime, so it was peaceful around us.

Laurie smiled, a lot. She seemed to belong to an almost extinct kind of women, sort of old school with braids.

Laurie was a Lay assistant Chaplain, at the Episcopal Chaplain´s Office, trained by Connie Hartquist.

Laurie lived on the other side of the bridge, in the East Bay, and said that it was such a difference, as if AIDS didn´t exist, other than as something to laugh about.

She mentioned the actor Rock Hudson, who was the first famous person in the US who came out as having AIDS, which made it real to people.

She said that people loved him.

Laurie worked as an editor at the University of Berkeley, and volunteered at SFGH one day a week.

She said that she always wanted to be out there doing good, but had realized that she was best suited to work with words. But when Sam died, she decided to get involved this way, and she thought it was good for her, because it gave her a balance in life.

So who was Sam?

He was a man she had worked with. His partner Alex had already died of AIDS.

I was able to be with Sam in his illness, and that was a really profound experience for me to… You know, one of the few things I could do for Sam was to rub his back. He felt bad all the time, sometimes intensely bad, nauseated and awful, but sometimes just low key bad, and he couldn´t eat. I couldn´t make delicious little dishes for him. It just made him feel worse. But rubbing his back made him feel better, and that´s the case with a lot of AIDS patients.

Laurie talked about back rubs and foot rubs, as helpful for AIDS patients.

We talked about pain. She said that AIDS is unspeakably painful.

There were not always volunteers available, and the chaplains were very busy as they served the whole hospital. Laurie mentioned that there was a lot of burnout, when working with AIDS patients.

Laurie laughed a little and said that she thought everything was spiritual. It could be giving a foot rub and not saying anything.

She said that even when people say no, when she introduces her self and offers them a back rub or a talk, is spiritual.

Laurie said that the cooperation with SHANTI worked well.

Sometimes the people at SHANTI will say: This person could really use some massage, or they could use comfort at any level. And I always take my cues from the person, him or herself. If they want to talk, I´m there to listen.

One thing that´s impressed me is that patients really DO give a lot – they give clues.  If they don´t want to talk, they don´t talk. They want you to go away, they say: Well, thank you for coming. So it´s not hard to read what the patients want from you.

I told Laurie that I had heard the day before that some people thought they were the people of God, so they would never get AIDS.

I wondered what church Laurie went to.

Laurie had a background with The Plymouth Brethren.[1]

It´s not so much that I tell people, it´s that I try to hear them out to what they are thinking and feeling, and then to suggest other ideas. Maybe they can see it in a different way, you know, that God doesn´t hate them, that God is not mean, that God in fact loves them and is really sad and sorry that they´re in pain.

And you know, to have someone say, really caringly, I´m sorry, is a really profoundly healing comforting thing, and I mean… That´s not at all rare that I come away felling much like… Wow! If they are half as ministered to, as I am, they are really lucky, you know.

I often thank patients, and often patients will be really surprised, like… Oh, did I give something?

And I think that is really good for someone who is sick and in pain and anxious and locked up in a hospital, stuck in a hospital. It is so terrible to be sick, and then it is even worse when you are in a hospital and people are going in and out of your room and they are doing things to you and they are hurting you, and you don´t know if they are telling you the truth.

And maybe your friends are not taking care of you as much as you wish they would, and there´s just so much happening and you feel really helpless – To be able to give someone something is probably really helpful for a patient.    I mean, it´s like you lose the line between giving and receiving.

Laurie mentioned another man, Ron, that she had talked to. She said she could tell that he was trying to figure out if she was going to hit him with the Bible, or lay down the Law. But he slowly relaxed in her company.

The nurse had asked him if he wanted to see a chaplain, and when he heard that Laurie was on the Ward he had said: Oh, the one with the braids? She´s cool, send her in.

Ron stayed at the Ward for a long time, and then he was transferred to another hospital for AIDS patients for long term care, Garden Sullivan.

I wondered if Laurie saw much of parents, lovers or friends of the patients, but she didn´t.

I remember my friend Sam saying, in a moment of terrible grief: You know, I feel like I´ve ruined my parents lives. And I don´t think he did. For one thing, he went home to die, to help them get through his death.

But I see that with a lot of AIDS patients, tremendous concern for the people they are leaving behind. A lot of patients have been left behind by their lovers, so they know how hard it is, and often they do a lot to help whoever is left behind.

I wondered if Laurie had ever been scared of being infected with the virus, and she said no, but told me about one time when she had given massage to several people, and then she scratched one of her eyes and got an infection. Since then she wears disposable gloves.

I wondered what this has meant to Laurie, to her thoughts about her own death.

It´s not so much that being with AIDS patients has helped me prepare for my own death, but it is really helping me cope with pain in my life, and I mean in a way – this sounds corny, but there is just so much… I see so much forgiveness, and so much… compassion, and so much… let me think about the word… so much gracious acceptance of really terrible, terrible things, that it´s… I don´t know if you´d say… it´s inspiring, or it´s instructive, but it´s really helpful to me.

Laurie spoke about patients being abandoned by family and friends, on top of them being sick and in pain and facing death.

I wondered why Laurie had chosen to be an Assistant chaplain, and not chose to volunteer for SHANTI.

I was with a man, I guess it was my only real deathbed-experience. They had expected him to die anytime, for days. His mom was there, and she was standing near him, stroking his head, and just saying: Let go Honey, it´s ok, just let go. I´ll be ok, and you´ll be ok, but just let go…

And I was there for a long time, just stroking his hand, talking to him, but he… Who knows, people have their own reasons for holding on, and sometimes only they know…

Before I interviewed Laurie, I found out that she was just about to get married, and I wondered what he thought about her volunteering at the AIDS Ward.

Laurie said he was really supportive and prepared to listen to all she had to say, because she really needed to share things with him when she came home, including really gruesome horrible stuff that no one else in the world wants to hear about.

I thanked Laurie for talking to me, and then we went to the AIDS Ward. She washed her hands when she came there and she washed them when she left – a ritual I soon adopted – and then she showed me around the Ward.

The Nurses station was in the middle of the Ward, and around it all the rooms.  At the back of the Ward was the Elizabeth Taylor Lounge, where the patients had their own kitchen, sofas, a large television screen, a piano, fruit, candy and a lot of flowers.

Laurie introduced me to Alison Moëd, I finally got to say hello to her!, and to one of the a counselors from SHANTI.

He told me that he often gave Laurie difficult challenges, and that she could handle them. This day he had a very special challenge for her: A young AIDS patient had just been told that his mother had passed away in New York. He needed someone to talk to and the counselor thought that Laurie was the right person to talk to him.

So we said goodbye, and I washed my hands as I was leaving.

PS I have totally lost contact with Laurie D. And I have really looked for her! Should you happen to know her, please tell her about this post. And that I would love to get in touch with her.

[1] An evangelical Christian movement, that started in Ireland 1929.