A couple of weeks ago (November 2019) an American journalist covering the early years of the AIDS epidemic, contacted me about a man I knew, John Lorenzini.

It is possible to search for names of the dead in an online searchable obituary database created by GLBT Historical Society and Bay Area Reporter : obit.glbthistory.org, and it is also possible to leave notes in memory of someone, and that is where she had found me, as I wrote a few words about John there.

Here is his obituary, I don´t know who wrote it. 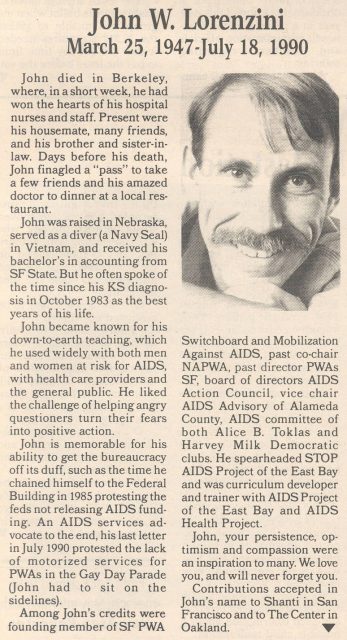 John had been my teacher at The AIDS Project of the East Bay in Oakland, in 1987, and I had interviewed him, and tried to stay in touch.

I had also seen him in a film about AIDS, so when we met in Oakland, I was pleasantly surprised.

I was happy to write about him, although I hope to write a special chapter here, about him. So I wrote a bit for her, but have not heard from the journalist  since then.

It is nice when what I write land somewhere, not only disappears in to cyber space. She eventually got back to me, so the information landed! But I have no idea what she did with it. I am too helpful at times.

John was SUCH a good speaker –  I still remember, not going back to notes or anything – 32 years later.
He was fast, charismatic, funny, ”The Trust Me Baby-days are over!”, he would say, when talking about sex.
And he was considerate.
I took classes for him in Oakland, at the East Bay AIDS Project, and all of us who were there, be it PWA:s, prison staff, people in the sex industry, volunteers, everyone were told to learn about sexual activities and words. Much unknown to some of us.
It could be the C word, F-word, etc. but that was just peanuts, they taught us all sorts of words, and the meaning of them, Beaver ( I forgot what that was), Fisting, Golden showers, you name it. And we were supposed to say the words out loud.
I remember the turn came to an older black woman, and you could tell she was struggling, and John came to her rescue, smiling friendly at her and letting her pass. He was such a friendly soul.
I think he and the other teachers really enjoyed them self, as they talked about men refusing to wear condoms, because they were TOO BIG. They did so, as they were putting on condoms slowly on their forearm, without them breaking, until they reached the elbows.
John also talked about fear, and AIDS. And he said that the largest sexual organ, is the brain.
It was hard to believe that he was sick, he was like one of those batteries. SUCH energy!
I wish you had had a chance to meet him. He was such a good man!
I´ll write more about John Lorenzini later.
Now, in 2023, I have still not heard from that journalist, and I have no idea how she used my words. Nor if she gave me credit.
I am not a user, and have never been, but I fear that that journalist is one.