I was on the AIDS Ward 5 A at San Francisco General Hospital, in the middle of an interview with one of the SHANTI counselors, when the door to the office suddenly opened and a woman called out:

I later learned that her name was Meredith Miller, (actually Eisberg) and that she was one of the few women who through SHANTI went public as a Woman with AIDS. 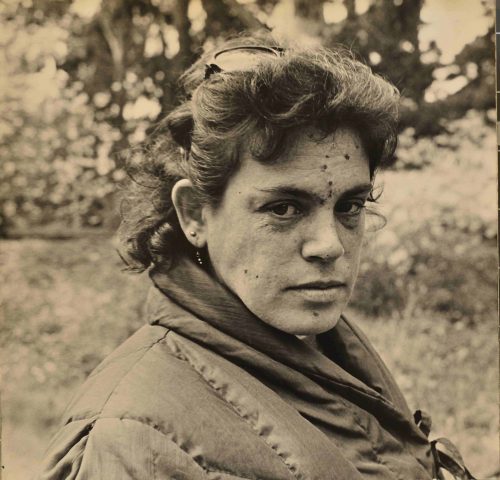 I ran in to her on several occasions, and I heard her speak at a conference. She said she was living proof, that women can get AIDS.

Here she is talking about her situation:

If I tell you I was diagnosed with a terminal illness, the normal reaction is ’Oh, do you need anything? How are you feeling?’ If I say I have AIDS, the first question is ’How did you get it? What have you been doing?’

Nobody cares that I am sick, that I hurt, that I’m tired all the time, that each movement is painful. They hear AIDS, and they have a preconceived idea of my life-style and my morality.

Hey, nobody told me about AIDS! What is my crime? That I loved somebody too much?” — by Meredith Miller, a mother of two, who died of AIDS in August 27, 1988. Meredith was 33 years old.

https://instagram.com/p/B4f_HUOFWrm/“If I tell you I was diagnosed with a terminal illness, the normal reaction is 'Oh, do you need anything? How are you feeling?' If I say I have AIDS, the first question is 'How did you get it? What have you been doing?'Nobody cares that I am sick, that I hurt, that I'm tired all the time, that each movement is painful. They hear AIDS, and they have a preconceived idea of my life-style and my morality.Hey, nobody told me about AIDS! What is my crime? That I loved somebody too much?" — by Meredith Miller, a mother of two, who died of AIDS in August 27, 1988. Meredith was 33 years old.🎥 CBS News Special: AIDS Hits Home (1986)📖 Fee, Elizabeth, and Daniel M. Fox, editorsAIDS: The Making of a Chronic Disease. Berkeley: University of California Press, c1992.#whatisrememberedlives #theaidsmemorial #aidsmemorial #neverforget #endaids

She talked about her children, a boy and a girl, how she had to give them up, so they would not be stigmatized by her being a Woman with AIDS.

There is a lot to tell about Meredith Miller, that I hope to write about later.  But right now I want to post a text I wrote for SHANTI in 1988, after her death.

The reason is that Alison Moëd, the former Head nurse at the AIDS Ward 5 A, asked me if I knew Meredith. I wrote that I didn´t know her, but that we had met, and that I knew a lot about her, because I had interviewed her friend and roommate, Michael Crisp.

It turns out, that Meredith´s daughter, now a grown woman, had asked Alison for information about her mother. I had wondered what became of Meredith´s children, so I was thrilled, and we are now in contact. Little did I know that my interviews and notes would be helpful to her, 31 years later.

Here is what I wrote about Meredith, printed in a SHANTI Volunteer Memo, in December 1988.  (I mention photos in the text, one of them is the photo at the top of this text.)

I came to San Francisco from Sweden, in part to see how you were, only to be told that you had died on August 27th. I met you last year when you were giving a speech in Oakland. I had heard so much about you and tried to get an interview but was told that you were very very tired. But there you were, preaching in a loud and harsh voice that women with AIDS like yourself were stigmatized, were called junkies and whores.

And you said, ”Has it ever occurred to any of you that someone with AIDS might actually have loved?”

You told us horror-stories about your former lover´s struggle and death in AIDS, and about your own struggle to survive, and to make sure that your children were provided for. You had had to give them up since you had no chance of taking care of them as they grew older.

You told us that you were preparing one file for each child, with photos and articles and personal notes, to be given to the children when they were old enough to understand, and so they would know who their mother had been.  It was good to hear that Michael, your roommate and friend, had sent those files off to your children soon after you died.

You were angry when we met, and I have been told that that was not at all unusual, that you were always angry – since the day she was born – says Michael – and that you fought until the day you died, when you could no longer speak or move by yourself.  I have heard so much about you: that you were badly hurt by life, that you went from one tragedy to another. And once I heard you say that getting AIDS was  just SO typical for your life – if anyone was to get AIDS, it would be you! Of course!

I have been told about your struggle and your pain, about your courage to stand up in front of millions, in front of the world, as a woman with AIDS.

I have been told about how you were trying to keep up the mask, how you held on to your pride and rage, and I have heard about the loyalty and generosity, about your humor ( the laughter and the tears), about your need for silence, and about how you, as death moved closer, more and more rejected the fact that you were actually dying.

Your memorial took place in the Rose Garden in Golden Gate Park, here in San Francisco, where you had found so much support, especially from the gay community.  Dave (Lawson), one of the few people you let near you, said he found it appropriate where the memorial was held because he saw you, symbolically, as a rose with all its thorns poking out.

I was never a friend of yours. We did share cigarettes, but I don´t think I ”passed the test”.  However I am a woman and, even if all your thorns told me to stay away, I DID care about you and I am greatly upset about the silence that surrounds your death. I have a hard time fitting you in among all the numbers of dead people in San Francisco, so many that the population here seems to slowly be getting numbed out.

As I am looking at your face in photographs, I see a face that never tried to flatter me or to beg for mercy, I see a TRUE expression, devoid of all games and manipulations. I see strength and pride and dark dark eyes. I did not see, until Michael showed me, that your face does not ask for my attention but demands it as you were ”living proof!”.  As you started to deteriorate, your features changed and, in some photos, you look like a starving animal.

Michael will soon scatter parts of your white ashes and, according to old Egyptian tradition, break your cups. I hope that you will find peace on the top of Mt. Tamalpais.

I asked your friend Brian Smith why no one had written about you, especially in one of the SHANTI publications, as a ”fallen hero” in the battle against AIDS and he said: ”Can you imagine how many deaths we experience every week?” And then he added ”Merry would have vomited if she was called a hero!”, and he suggested that I write my feelings about you. So here I am, writing about you,  and I hope I have not made you sick. I am from the other side of the world and I hope that you are satisfied to hear that your harsh voice has reached that far.

I asked Brian if I could quote from the letter you sent him, and that he read at your memorial service, and here are parts of it:

”It makes me sad that you want to say good-bye when the time comes. I tell you that all you have to do is think of me, and it will make my star shine a little brighter; I will be laughing, and you know how spontaneous that laughter can be. Do you really think that AIDS can kill my tears and my laughter? Do you think that this love that I carry within can die? My spirit is eternal and flies upon an endless plain. There will be times… an ocean breeze that caresses your face, the scent of a flower, the call of a wild animal and you will hear me, feel me near you and know that I love you. Look for the flight of the hawk, who can watch you from such a great height. I will hear you too and know that I have a friend… forever.

And so, my dearest gentle giant, don´t be sad, if perchance, this existence should be cut short without the formal farewells… it will be a new beginning. Here is a dream for you: When we were in the mountain, lying in the quiet embrace of the granddaddy pines, I thought in my heart that if you could have held me there and I could have let my spirit free, then, surely I would have been in heaven.

A sentimental letter, but save it for when I am no longer in the physical and you will see what I mean…”

The final words of that letter were:  I love you Dear one, with all my heart !!!

She signed the letter with the name: Spoken sky

Here is Michael Crisp, walking in the National AIDS Memorial Grove in San Francisco, where names of people who died of HIV/AIDS are engraved, in ever widening circles.

I know that Meredith´s name is there now. Friends of hers added it.

Since I wrote this, even Meredith´s son has found me, and he and his sister are now in contact, after all those years!

But,  for reasons unknown, he was never given the package that Michael sent him.

As Meredith would say: My Heart!