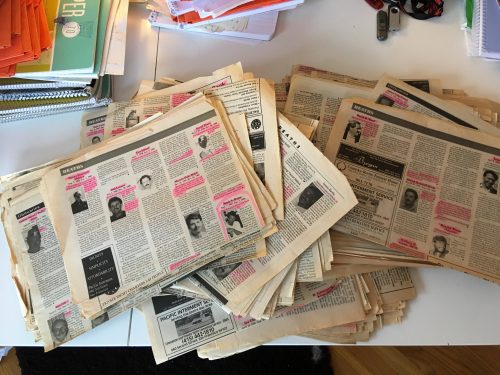 I started collecting obituaries in BAR in 1987, when I came to San Francisco for the first time. I eventually had a whole stack of them, with hundreds and hundreds of names and photos. In between my visits, a friend of mine that I got to know at BAR, Ann Soucy, sometimes helped me collect obituaries and send them to me.

But I have obituaries until the end of 1993. Not all of them, but many. I show them, when I occasionally speak about my work in churches and libraries – to make people understand what it was like in San Francisco, and in other places in the world.

My work with HIV/AIDS has been going on for many years, and during all those, often very lonely years, the obituaries have kept me going.  I have only had to look at the photos, and it all starts again.  As right now, it is in the middle of the night, and I am not tired.

I have wondered what they did in life and what their interests were. How was their death portrayed, who was there when they died, what did their often extended families look like, including cats and dogs, and what charities did they choose?

Obituaries became less poetic over the years,  and just said that the person died, or passed away, or passed away peacefully, often after a valiant battle with AIDS. In 1993 (maybe also before that) BAR changed its policy regarding obituaries: 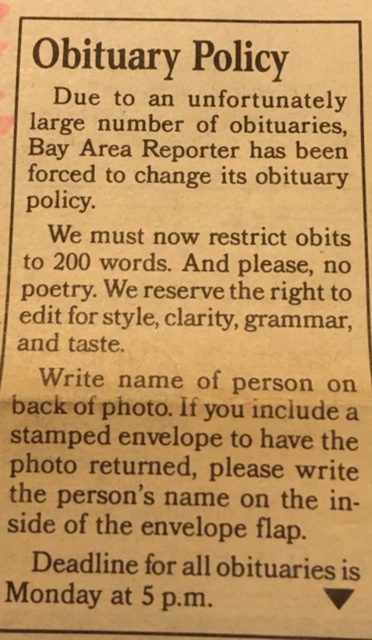 I thought I would pick out passages from some of the obituaries that were a bit different.  There are so many, but… I begin with a quote by Jean Paul Richter (1763-1825), that was printed in an obituary for

”Each departed friend is a magnet that attracts us to the next world.”

Bratsy Patsy packed her bags, kissed her lover of 16 years, Kenyon Marsh, goodbye, slipped from the bondage of this life, and caught an express elevator to the stars.

I wrote this in 2019, and found out, now in 2021, that Timothy Leven´s sister, Theresa Grant had tried to contact me a long time ago. But we found each other and she sent me this Christmas card from Timothy (left) and Kenyon. 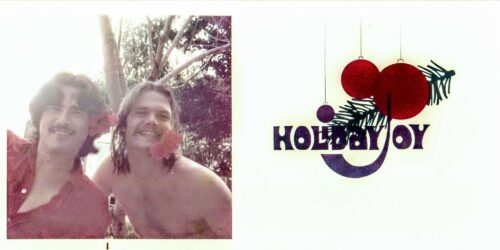 On the morning of Friday July 21, Will´s free and independent spirit passed quietly into God´s hands.

He was buried in the family plot in Buffalo, Texas ”overlooking rolling hills with trees and open pasture where stallions run free…as free as his soul.”

After a long fight with AIDS, Gary Lee passed to a beautiful world full of shining colors with very much love and admiration.

During the final 22 months of his life, Fred calmly and courageously struggled with AIDS while continuing to help and support those around him. Refusing medication at the last, he died happy and peaceful.

Dennis´ journey here ended as a new door opened for him and he peacefully crossed the threshold. His positive and healthy attitude, mixed with just the right dash of stubbornness, helped him fight strongly against tremendous obstacles presented him by AIDS.

On February 6 at 6 p.m., as a full moon was rising into a clear winter sky, our dear Jim rose gently into the light.

Early in the morning of July 22, 1993, Joseph Holloway´s life was stolen from him. An insidious plague of homophobia and government inaction stripped him of his dreams and forever ended his tomorrows.

A virus only destroys if it is left unchecked. A decade of presidents not only left the virus unchecked, but fanned a conflagration of ignorance, hate and ineptitude. In 1993 Joseph Holloway did not die from AIDS, he was murdered by it.

Rand took his leave of this world and flew with his angels early St. Patrick´s Day. He fulfilled his wish to depart through his lover´s arms.