A little bit more about the name of my blog.

When I came to San Francisco in 1987, I met Gary Shepard. He was one of the ”Emotional Support Volunteers” at SHANTI.
Before I met him, I spoke to another volunteer  who turned out to be HIV positive, and he really admired Gary because of his commitment to his clients, and said that if he got sick, he would like Gary to be there with him, as a volunteer.

I interviewed Gary about his work, and he told me about some of his clients. I want to tell you about one of them, Ed, because even I met him, at Coming Home Hospice, in the Castro District in San Francisco.

Ed had dementia and could no longer speak, but the could do two things; smoke and smile.
He was lying in his bed smoking, skinny arms and legs protruded from the white sheets. He was not to be left alone while smoking, so there was always someone with him when he smoked. Even I, who was a smoker at the time, spent some time with him when I visited Coming Home Hospice.
But that was not the only reason why people entered his room, they came because of his smile. If I should try to liken it to something I would use  words like angelic and Infinite goodness, and you wanted to be smiled at like that, over and over again, it was almost addictive.
When Ed was dying he was given Oxygen, and Gary told me that Ed moved his hand, slowly, back and forth, back and forth, as if he was still smoking. Gary stayed with him until a few hours before his death, but as soon as Gary came home, they called from the hospice and said that Ed had passed away. 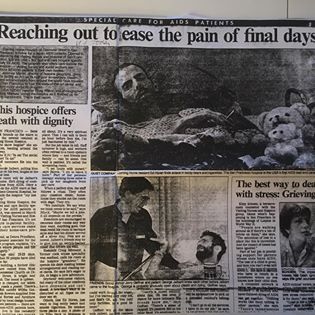 Ed in his bed.

In the photo under this there is man in the bed – I saw him having extreme hallucinations. He was a nurse at San Francisco General Hospital.

Gary talked about his work as a volunteer. He described himself as a witness to the suffering of his clients. If no one saw what they were going through, it would be meaningless. I liked those words, and decided that my work was to be called To be a witness, since I am also, or was, a witness.
Many years passed, and there was and is a silence around HIV/AIDS, and when my book about what I had seen in Sweden came, I called it Det är få som talar om dem/ There are few who talk about them.

When I had decided to write a blog about what I had seen in San Francisco and Oakland, I searched the Internet for the words To be a witness, but often found religious pages, religious testimonies, so I added the word really, and that worked: To really be a witness. To really see, to really hear.

Gary and Ed are just a few of the people I want to write about. I was lucky enough to meet so many teachers during this time; clients, lovers and family members, volunteers and hospital staff, that I followed, for as long as it was possible.

I want to end by saying that Gary, that we will hear more about in the blog, kept Ed´s ashes in his home for four months, when he, together with a friend of Ed´s, spread his ashes under the Golden Gate Bridge.