I am spending my New Years Eve 2021, with Irene Smith.

In the post called ”I have lived on signs… and impulses…”,  I mention that I sent a message to my friend Alison, about a man who died in 1989, but was not laid to rest until his mother died in 2020.

She answered that she could not write at the moment, she was with a friend who had just died,  ”I´m sitting here with Irene…”.

I thought it couldn´t be Irene Smith, because I had seen her on Facebook not long ago, so it must be someone else. But it wasn´t, it WAS the Irene Smith we both knew, and she had just died, surrounded by friends, in her home in San Francisco, where I had once interviewed her.

It was an American friend who showed me an article about Irene Smith, in 1987.

I have found a (blurry) photo from that time. 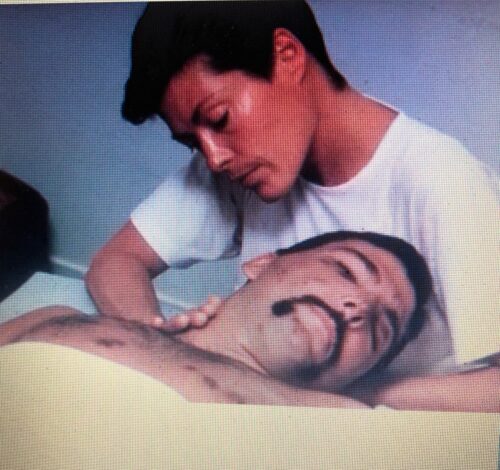 She had been a drug addict who had turned her life around, and was one of the few people that touched people with AIDS.  She volunteered at San Francisco General Hospital and at Hospice of San Francisco, as a Massage therapist.

Her story was so interesting that I sent a letter to the SFGH, asking if they could help me get in touch with her.  She eventually wrote and told me to contact her when I came to San Francisco.

My mother had died suddenly in June that year. I had before that written to Dr Elisabeth Kübler-Ross, just trying to get in touch with her, and now I wrote again ”Furthermore, my mother just died”, and told her about my plans to go to San Francisco, to visit SHANTI and see Irene Smith. She never received my first letter, but answered to the second:

”All I know is that your mother died suddenly and that you are welcome and have made the arrangements to see Irene Smith and the SHANTI people in San Francisco and those were probably the most important news anyway.” (-)
”My SHANTI friends, especially my best friend, Irene, will take good care of you and will show you what you need to see.
I wish you a good journey and make sure that when you are with Irene that you give me  call. She has my number.
My love and blessings,
Elisabeth.”

I met Irene Smith in her  apartment, and she brought me out on her balcony and offered me a glass of water. There was however too much noise, so we moved inside.

She was dressed in white, and everything around her was white. Irene was very beautiful, and she seemed cleansed from everything. The only words I can think about are serene… serenity.

I knew she had been an actress, but had turned to drugs, and worked as a dancer and a prostitute to support her habit.  But she had somehow stopped, and was now doing AIDS work.

It was interesting to interview Irene. And a bit scary.

She would sit silent and just look at me, until I looked away. And when asked a question, she became like a computer that is stuck. She looked down on the floor, as if sorting things out in her head, and then she delivered an answer, somehow relieved.

So how  come AIDS work?

Irene had had a Massage license since 1972, but she had never worked with it due to her drug use and alcoholism, but after three workshops with Elisabeth she called San Francisco General Hospital and asked if she could become a volunteer massage therapist at the hospital. They had never heard of that, but she was welcome to come and talk to them.

In the summer of 1982, she was asked to see her first AIDS patient. She was not sure what that meant, but was shown how to protect her self, and then she started.

Irene said that fear and isolation in the country in 1982 was so great, so that even if you had a network of friends, you were not touched, and friends did not stay close, because they did not feel safe.

The word spread, and more and more people wanted to take part, because they were not touched, nor loved and nurtured, Irene said.

Irene worked 7 days a week on a voluntary basis, and she was eventually given money by the AIDS Emergency fund, SHANTI and the Hospice she was volunteering at, so she could stay in the field, as she said. It was 700 dollars a month.

She was asked to train other volunteers, and it grew and grew, and eventually she created a program called Service Through Touch. Irene was asked to teach and do workshops both in the US  and Canada, and in Europe. I had hoped to go to a training in Copenhagen in 1990, but I was pregnant at the time and also sick and could not go.

I want to move on to the later part of the interview, when she spoke in a more private way about her life. Today I find some of my questions insensitive, but she answered, and I am grateful for that.

Irene was extremely busy when I met her, she was doing  workshops, had emotional support groups for volunteers both at Hospice and at the AIDS Ward. She also gave massages her self, to make a living.

And here I started asking questions about Irene, and later wrote on the side: ”The big silence. The interview with the long pauses.”

I wondered about her time as an actress, how long had she been active?

I wondered if she had memory blocks from those years, and she repeated my question and sort of froze, and her eyes penetrated some memory,and then she continued:

Irene talked about the theater – and film business, about being young and vulnerable and beautiful, and people not necessarily being interested in her ability on stage.

Here started my insensitive questions, where I asked if she had a lover, and asked a Why, when she said no.  Some part of my brain did not connect with the fact that she had spent 9 years as a prostitute, and had probably seen the worst side of humanity in many shapes, and been used and abused.

Irene told me that she chose to not have a lover. She could not see how a lover would fit in to her lifestyle, nor where she would  put one on her schedule.

And then there was silence.

Here I started laughing because she was so peculiar, every word seemed to be so incredibly measured and weighed and a sentence was not delivered until it was really ready.

I said that her work with Elisabeth Kübler-Ross must have changed her life. Irene talked about her life with abuse and prostitution.

The lifestyle I was living did not fit the personality that was coming up in me. It did not fit the vulnerable child that I seemed to be, at that period…and I didn´t know any other way to support my self, plus I really didn´t know how to go out and be part of the society.

I didn´t know anything but drugs and alcohol and prostitution, so… Elisabeth had talked about dying people being… very loving, very accepting, very open, and not concerned with cars, clothes, the latest theatrical presentation, or the most modern of conveniences. They were on a different path, and so I thought: That is the group of people I need to socialize with,  it´s dying people.

So Irene started working, silently touching the sick and the dying.

Irene said it was a perfect setting for her, she could  be her self, she didn´t have to talk about things she didn´t know about, because, as she said, she had always been in the whore house on drugs. And she laughed a little.

Irene continued, saying that she had NOT supported her self through prostitution since the latter part of  1983, but there had also been other changes, because she had gone through another transition.

Irene talked about how her work has changed. When I met her in 1987, she was working more with newly diagnosed people or people that were doing well on alternative therapies, she said, it was more helping them live with a quality to their lives, rather than helping them accept death.

Here Irene stopped her self, but said that she would continue her work with people with AIDS.

We moved over to the massage, and I will not write so much about this here, only a few things.

Irene talked about being able to feel compassion and love for our selves, then we can communicate that to another person, by touching them, stroking them.

Here Irene talked about our own pain, how we need to address it, and work with it, if we are to help other people.

Later we called Elisabeth Kübler Ross, and I was invited to come to a workshop on Death &  Dying, in New England.

I took some photos of Irene. It was too dark, but she is there, with a little scratch on the film: 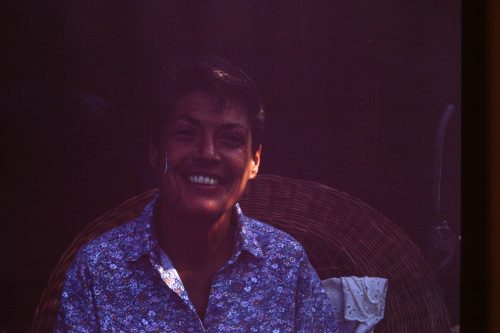 I stayed in touch with Irene Smith, for a while, but we unfortunately never met again.

But to my joy I found that she was in the film about the AIDS Ward at San Francisco General Hospital, ”5B.”

There is so much more to read on her own page.

Here is an obituary, Irene Smith passed away on April 4th, 2021.