I remember this cover from September 1987 so well, and I have always wondered what happened to the little girl. 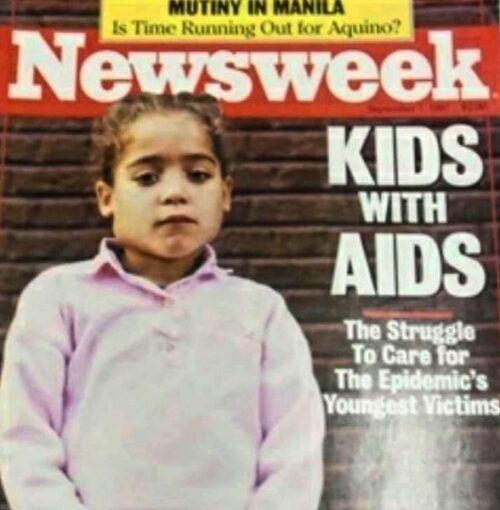 Now, through The AIDS Memorial page, I have  found out.

The girls name was Boobie, and she passed away a few months after the cover was published.

She became a representative for all the children that were affected, either by being infected them selves and/or becoming orphans.

Boobie´s mother gave birth to six children, while using drugs.  They lived with their grandmother. Bobbie had a younger brother, Lil Eddie, who also passed away.

The woman who tells the story is one of their cousins, who also lived with the family. She said that Boobie and Lil Eddie were treated like Angels because they were so sick.

They both died at home, and the extended family stayed with other family members or friends during that ordeal.

The children are buried together, but not with their parents.

I eventually made contact with the family, and was told that the parents did not have money for the burial, so it was given to them by Social services or something similar – and here is what drugs do to people  – the parents used the money to drugs.

In the end, a woman who had lost her son in an accident, offered the family space for the children in that grave.