The Back Cover – I can´t get a good photo of it, so I present it like this instead.

I was present at the first display of The Quilt, in Washington 1987, and the photo is taken by me. 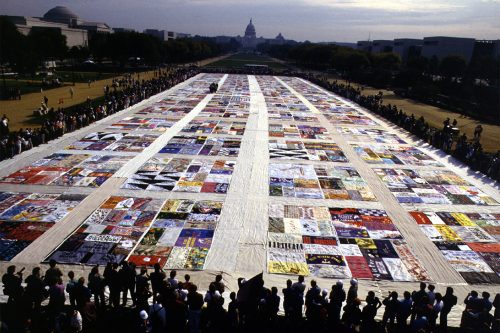 I had made three Panels, two of them were present, but not yet sewn on to the Quilt.

The one for Matti however, was in the Quilt and in the poster for THE NAMESPROJECT : A National AIDS Memorial. ( The poster has lost some of it´s color through the years.) You find the Panel in the middle, to the left.

Matti was the first person I met with Kaposis Sarcoma. He was absolutely covered by it, especially his face. He was a young man from Finland, living in Sweden with his partner Mikael.

Some of the people in this blog come back in other posts, like Matti, in the post Matti… and the lesions.

The other Panels were for Peter C. – the man whose ashes I helped bury – and for Roar, a Norwegian man living in Sweden, and the second man to die of AIDS in Sweden. I knew him and his former partner Sighsten Herrgård – who was a well known model and designer – and the first famous person in Sweden to come out as having AIDS, in 1987. 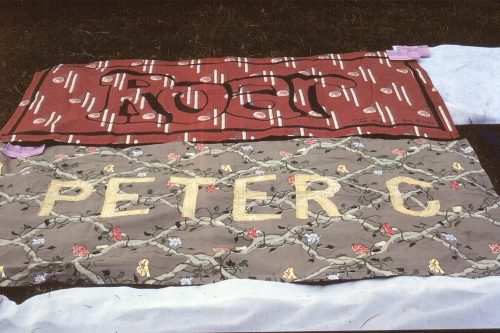 The text on the Back Cover says it was a senseless time, when so many died, often after long suffering. The Antiretroviral drugs changed people´s lives dramatically, but they unfortunately came too late for most of the HIV positive people in my work.

I write about the gratitude I feel for the people in the book, for letting me follow them, and I thank their relatives, lovers and friends for all of their help with the book, and hope that we, together, do good by publishing the book.

Inside the book I thank some people, especially the late doctor Elisabeth Kübler-Ross and Peter Månehall, Ombudsman for HIV-Sweden, who both encouraged my work.

I am very grateful for the work of the late Randy Shilts, (I am aware of the Patient Zero controversy) whose book I have read several times. During all those years, in times of doubt, I have only had to put my hand on, And The Band Played On, to continue.

Another help – as strange as that may sound – has been the many many obituaries in Bay Area Reporter, often sent to me by my friend, Ann Soucy, who worked there at the time.
I have read them over and over again, looking for information about (mostly) men; their lives and interests; who was with them when they died; how was their passing described, and what charities were people asked to donate to in memory of them.

I want to end this post by quoting one of the obituaries, from January 21st 1993, about a man called David.

Didn´t like charity.
In his memory,
make a friend, share a drink
adopt a stray.
We love you Davey.
FUCK AIDS